In search of the perfect status

From the moment that you are born you are taught to dream big....you are told to strive to get into the best colleges, to get the most well paid jobs. If you don't...well then something is wrong with you. If you are happy with a job with a level of job satisfaction instead of a job with really big bucks...."Are you insane?"

Job satisfaction, as my very practical and pragmatic mom says, won't get you 3 pedigree dogs, an SUV and big house to accommodate all of this (she attacked me from my perspective you see).

When I travel in the crowded local trains and see people, daily passengers, traveling by such trains day after day I am filled with a sense of desperation. I don't want to be one of them! I don't want to go to work each day getting pushed around in a stinking and whimsical local train! N-O!
But then, when I was working at an ad agency in the poshest locality of Hyderabad, Banjara Hills, I saw unlimited richness. Expensive holidays, designer (ugly!) glares, zooming around in expensive automobiles....you get the hang of it right....I didn't feel the longing for that kind of a life AT ALL! I am afraid that high up there on the top rungs of success the little joys of life might become hazy and ultimately disappear!

A bunch of my friends are dying to go for a little holiday. Just us friends. On a whim I looked up the prices of The Leela and Taj Exotica. The lowest fare for a room was 10,000 (@ The Leela)! I could go to Goa for a few days and then spend a week at Gokarna in that money!!!
Wealth ain't a joke! It's a boon alright! But just hope it doesn't devalue or lessen the thrill of a shoestring budget holiday, a shopping spree at Sarojininagar market, cruising around in a rickety scooty, or cuddling a dirty but incredibly adorable street mutt!

Of course, if a realist or a cynic or may be the parental community read this they might just write it off as idealist fancies of a young girl. May be they will say...."We were just like you once. You will learn the realities of life as you go along"!

I honestly can't think of a title!

The problem with rookie bloggers is that they claim a bit of cyberspace with a great deal of enthusiasm but pretty soon down the line the enthusiasm fizzles out and then suddenly nothing inspires you to write! Well that's the problem I personally faced.
Its a sucky feeling! To sit in front of the screen and being stumped for something to write about....it's the perfect way to make an utter fool of yourself in your own eyes!
However...enough is enough! Time to WRITE!
Well...for starter....just the other day I had quite a memorable local train journey! It would have been quite hellish had it not been for good company alongside.
Now local trains being late is nothing new....its actually normal. Late afternoon warm sun poured into the station as we waited for the blasted train. An aspiring group of documentary filmmakers (:P) were shooting a yet to be named film. They had taken a lot of interesting footage which had marvellouly invaded some very private moments of scores of people. And they were at it again at the station! :D
One of them, lets call her Siya, is a great chum of mine and as we sat chatting we zoomed into a the balcony of a tiny apartment a few yards outside the station. It was something you have seen on TV scores of times but up close and live it's the most beautiful thing to watch. A few months old baby with his mother holding him in her arms. She was keeping up a constant chatter with the baby and the baby's innocence and the blanket of love around them kept us mesmerized for quite a bit. Siya is the type who is so in love with babies that if she sees one her instant urge would be to pick it up and shower it with unconditional love from her highly evolved maternal side!
Finally the train came and at that time in a flash I truly understood the meaning of "filled to the brim"! It was a mess of tightly squashed bodies inside the compartment and at the entrance people were hanging on like the Buddhist prayer cloths flapping in the wind!
Well that was me and Siya! There was place enough for one foot, a pole to hang on to and all the strength in you arms to hang on tight as the train whooshed ahead!
As we sped ahead with me on the outermost edge it was the most exhilarating experience ever. As it was speeding over a small bridge under which flowed the putrid waters of Hussain Sagar it was pretty much like cruising over water on bare feet! Phew! Jesus must have felt pretty good when he actually did this feat! Siya was right behind shuttling between taking more footage and holding me in case I decide to jump off!
At the Secunderabad station a hilarious cat fight broke out in our compartment! I so totally understand Barney's love for cat fights!
At long last our stop arrived and after a brief struggle to get out of the darn train before it chugs off again we were free!
Cherry on a not so toothsome train ride?
Well the "khaddar" [;)] that I am it has to be the lip smacking chicken shawarma with a generous dollop of mayonnaise me and Siya had on the way back to the college!
Mmmm...
:)
Posted by Jane Of All Trades at 5:46 AM No comments:

After a certain period of uncertainty, worries, stress, tears, and heartaches the littlest of things can trigger a deep sense of well being! This, my friend, I speak from experience.The calm and cool of my room (with useless pretty bay windows!) was gently lulling me and my roomie to sleep as the day inched forward to dusk and beyond...The gathering storm clouds outside with the rain laced wind moaning out loud made its presence felt rousing me from a light doze. By the time I dragged my lazy ass out of my room it had started raining in earnest adding to the charm of the sleepy droopy unremarkable afternoon. From the other end of the terrace I saw a figure skipping madly in the rain and skipping right towards my direction. That's Sneha for you!
With that ever lovely smile on her face the doe eyed creature was enjoying the rain to the hilt! And that was such a pleasure to watch! To revel in her joy seemed to be most natural thing on earth!
Quite a remarkable sensation on that unremarkable boring afternoon!

Posted by Jane Of All Trades at 4:50 AM No comments:

Ohkay.....the three pics in the header are not really all that random or rather I didn't put them up just coz the black and white hues gives the blog an aura of dark mystery! [contrary to what most people are prone to believe! :-/]
The ciggie is my hopeless attemplts to kick the filthy habit.
The beach...a constant desire to go to one...serene and lonely...
AND
The calla lily....my favourite flower....which is too damn expensive! X-(
Posted by Jane Of All Trades at 9:34 PM No comments:

Workaholism....went and flew a kite for the day!

It's one of those type of days which will make my mother shudder and would have seemed blasphemous to me say about three weeks ago!

Let's just say the only consolation for me is that I have a partner in crime :)

Waking up at three in the afternoon....


Lazing in bed till four.
Finally dragging our lazy ass and pricey tastebuds to KFC where we gleefully splurged and hogged....
Dilly dallied another half an hour after the meal deciding where to go next. (Returning to an utterly dead campus with hardly a living soul in sight not being a very attractive option. Besides the weather was too damn sexy to get back to ghostland)
Voila!
Landmark!!! The most amazing place to while away hours and hours and hours.......of time! :D
Off we went and did just that! :)
But not being the clones of Mutterer and Crusher ;) we were done with the book temple in about three hours.
Then what?
SPLASH!!! The extremely overpriced and a little snotty store.....an amazing chance to window shop to our hearts content.
And that's excatly what we did.
Not for long
Only till the shop lights started going out and it was closing time.
Two frankies and a glass of fizzy black crap each, one auto and off we went, zipping across the empty roads of the ungainly sprawled out city...back home!
Truly a day remarkably spent!
[Approximately three weeks ago I would have sprung for "wasted" instead of "spent"....
A remarkable change indeed!!!]
Posted by Jane Of All Trades at 11:03 AM 3 comments: 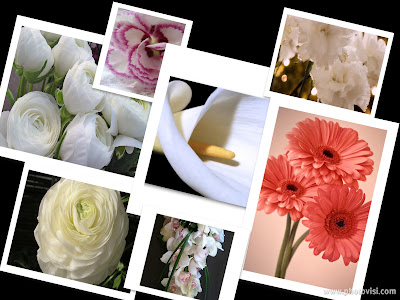 Ok...I love flowers!
Yeah...fine I am what the standard mould for tom boy reckons...and I think melting love for flowers is a trifle....ahem...unusual!
But...what the hell!
Gerberas and sweet williams are lovely reminders of my garden back at the rambling bungalow at Durgapur. In spite of the garden being filled with a variety of seasonal flowers these two lit up the patio like no other flower could!
Cymbidium orchid, ranunculus, calla lillies and carnations are my favorite flowers and don't ask me why!!!
Shyaah!
Some people should learn the importance of gifting flowers!
Posted by Jane Of All Trades at 11:51 AM No comments:

Hues of gray and wetness all around...loving it :)

The fine curtain of drizzle seems incessant at this moment.

At the tail end of the month Hyderabad is in the throes of a weather depression.

Now the weather is like a soft lullaby...
It's lovely.

It's the kind of day that makes one feel lazy and lethargic and very contented with life...
As for me I wish the temperature goes down by 10-12 degrees...
A chance to snuggle into a light sweater...curl my toes in my socks...have a book in hand coupled with a mug of steaming filter coffee....and let my fecund imagination take flight as the steady drip-drip outside my window adds a soft music to the cozy silence around me.....
For now.... I rejoice in the blessedness around.
Posted by Jane Of All Trades at 5:09 AM No comments: